1. Sound waves cannot travel through vacuum. They need a medium - solid, liquid or air - to travel. Sound travels the fastest in solids (about 5000 m/s in concrete), moderately fast in liquids (about 1400 m/s in pure water at 0 oC) and the slowest in air (about 330 m/s).

2. Sound waves are longitudinal waves (pl. see: diagram below): When sound travels through a medium, the particles of the medium oscillate parallel to the direction of travel of the sound. Due to the oscillations of particles about their mean positions, a series of compressions and rarefactions (not the particles) travel through the medium and to the surrounding media including the air in our ear.

3. When the air in our ear picks up the sound waves, its particles too oscillate to create sound waves which hit our ear drum which then vibrates the three 3 little bones (the 3 oscicles), the oval window and the fluid in the cochlea of our ear. Sensory receptors in the inner lining of the cochlea then pick up the waves in the cochlea fluid and change them into electrical impulses which are interpreted by our brain as sounds of different pitch and loudness.

Pitch and Frequency of Sound 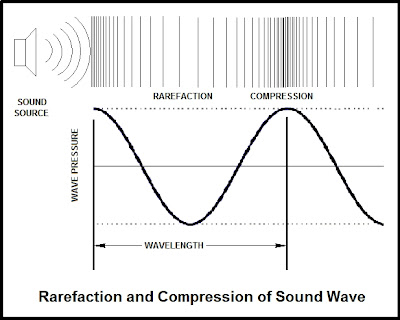 Generally, there are three characteristics of sound:
1. Frequency - Pitch

The frequency of a wave is measured as the number of complete vibrations of particles of a medium per unit time. A commonly used unit for frequency is hertz (Hz).

A string vibrates with a particular fundamental frequency. It is possible, however, to produce pitches with different frequencies from the same string. The four properties of the string that affect its frequency are length, diameter, tension, and density. These properties are described below:


Loudness and Amplitude of Sound

The loudness of a sound depends on the wave's amplitude.
The louder the sound, the higher the amplitude. So, amplitude is also a way of measuring the energy sound wave has.


The system used to measure the loudness of sounds is the decibel system, given the unit dB.


Amplifier is a device to increase the loudness of sound by use of an external energy source. It drives the loudspeakers used in PA system to make the human voice louder.