Force on Current-Carrying Conductor in a Magnetic Field


The Resultant Field with Catapult Effect (a.k.a. Catapult Field)
i.      Just as two bar magnets coming within the magnetic field of each other would experience a force – a push (repulsion) or a pull (attraction) depending on the positions of their magnetic poles:

iii.      Drawing the ‘catapult field’ is one way to determine the direction of movement of the current-carrying conductor in a magnetic field – however, it could be time-consuming. A much simpler method is by the use of Fleming’s Left-hand Rule (or Motor Rule): 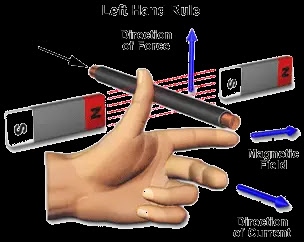 iv.      Interestingly, the magnetic field of a current-carrying conductor itself would also exert a force on the other magnet which field exerts a force on it - as Hans Christian Oersted discovered in 1820 when the pointer of a compass moved when current was switched on in a nearby circuit – It is this discovery which led to the theory of electromagnetism and its many useful applications. 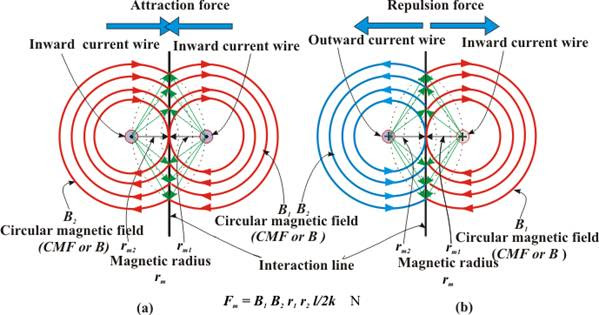 i.      The magnetic fields of two current-carrying conductors would interact with each other as would the fields of two permanent magnets.

v.      Turning Effect of a Current-Carrying Coil in a Magnetic Field

iii.      The direction of rotation of the coil would reverses when:
i.      The current reverses
ii.      The external magnet poles reverse 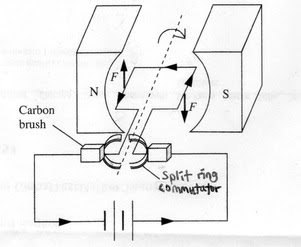 i.      The diagram above shows the construction features of a simple dc motor.

ii.      A dc motor consists of a rectangular coil of wire placed between two permanent magnets (a.k.a. the external magnets).

iii.      Both ends of the coil are soldered to a commutator made up of two semi circular copper rings.

iv.      Two carbon brushes are held against the commutator with slight pressure with the help of springs.