1. Reflection is a wave phenomenon: All waves - water waves, sound wave, electromagnetic waves (including light) - can be reflected. Reflection occurs when all or part of the waves are returned when the waves encounter or hit an obstacle.

3. Since, upon reflection, waves direction changes, velocity of the waves therefore changes too.

(Thus, for the ensuing SPM Physics 2011 Paper 1, Q32: Which statement is correct when water waves are reflected by a reflector? The answer should not be A "The velocity of water waves before and after reflection are the same" as erroneously given in the sole booklet of Past Year Questions sold in bookshops throughout the country. It should be C "The amplitude of the water waves becomes smaller after reflection (due to imperfect return of wave energy as some wave energy is transformed to other forms of energy - e.g. heat and/or sound and as the reflected waves travel, damping occurs resulting in the amplitude eventually becoming zero - which is why all reflected waves eventually subside and all echos get fainter and finally disappear over time)

5.  The amplitude and energy of the reflected waves will be lower because when reflection occurs, not all the wave energy are returned - some will be refracted or diffracted and some will be transformed into heat and/or other forms of energy (sound for water waves) and, over time, damping (overcoming resistance) occurs too.

6. Reflection of waves obeys the Law of Reflection:

7.  Crest and Trough of Water Waves Act as Lenses: In ripple tank experiments, you will note that there is a lamp placed above the tank shining light down through the water waves creating on the white paper placed below the tank a water waves pattern consisting of bright bands (representing the crests) and darker bands (representing the trough) . This happens because:
8. Mechanical stroboscope:
9. Experiments Relating to Reflection:
10.Application of Reflection of Sound:

Echoes are caused by the reflection of sound. A sound wave will continue to bounce around or reverberate until it has lost all its energy. A wave loses some of its energy when it hits an objects before being reflected. The energy can be lost as heat - the amplitude of reflected sound wave and thus loudness of the sound get progressively lower over time.

The phenomenon of the reflection of sound is used to determine the distance between the two objects, for example depth of seabed, depth of cave or width of a valley. The type of sound used depend on the media in which the sound wave is to travel: For examples, for echoes through air, normal audible sound can be used; whereas, to penetrate human body, sea bed and the likes until reflection occurs, ultrasound of higher frequency/energy is used. 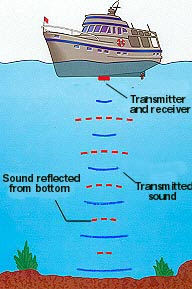 Sonar (Sound Navigation and Ranging) is used to detect underwater objects (corals / fishes) or to determine the depth of the water by means of an echo. Sonar equipment emits a high frequency sound signal (ultrasonic frequency) which is reflected by the object in the water. The reflected sound wave is received by the sonar receiver. The time taken for the echo to return is used to determine the distance of the object below the water surface.

Sonar wave of high frequency (ultra-sonic sound) is used because it possesses more energy, high penetration power and can travel further through water.