1.       Waves are caused by oscillations or vibrations of particles of the medium in which the waves travel.

(An inquisitive student may ask: What about the travel of electromagnetic waves through vacuum, say, from the Sun to our Earth's atmosphere? Doesn't the aforesaid statement imply that there must be particles in oscillations in vacuum to transmit the electromagnetic waves? And that the particles must be mass-less and invisible since vacuum is mass-less and invisible? Are there such particles in vacuum? If you are one of these inquisitive students, I encourage you to probe these questions all the way to PhD level. If you can't find clear and convincing answers there, then do try to provide answers for us. For SPM, answer this question: Yr 2007, P1, Q34 without hesitation)

3.                  Waves transfer energy (and momentum, in a closed mechanical system) from the oscillating source without transferring matter:

a.       When waves travel through a medium, the particles of the medium merely vibrate or oscillate about their equilibrium positions – the particles do not travel in the direction of the waves.

b.      Experimental proofs:
i.      The “radio & candle flame” experiment - the candle flame swaying back and forth and not pushed to one direction only; or
ii.      The “floating ball" on water waves – the ball moves up and down on the same spot without moving in the direction of waves. 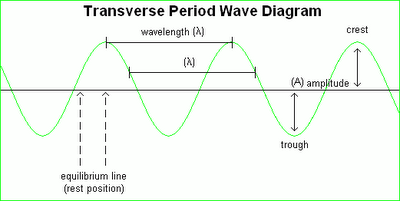 b.      Longitudinal waves where the vibrations of the particles are parallel to the direction of propagation such as sound waves.


5.                  Production of waves (of different types)
:
a.       Water waves are produced by a disturbance or a series of disturbances on a water surface causing oscillations of water particles which produce the water waves.

b.      Sound waves are produced by a disturbance or a series of disturbances on air particles such as by hitting a tuning fork, plucking a guitar string, moving the diaphragm of a audio speaker by an electromagnetic mechanism, etc..

c.       Electromagnetic waves (including light) are produced by oscillations of electrons in an atom; or, movement of electron from a higher energy orbital to a lower energy orbital.
(Note: When you go to A-level, you will be more familiar with the concept of electron orbitals (s, p, d, f... orbitals rather than orbits for electrons) and the Heisenberg Uncertainty Principle as to the position and behaviour of electrons at any time. At O-level, it is okay to think of electrons as orbitting the atomic nuclues) 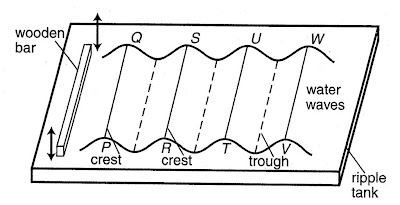 a) Diagram showing the amplitude of a wave: 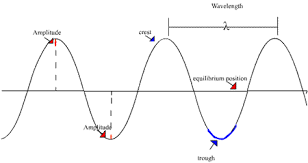 b) Diagram below shows three possible amplitudes of a swinging pendulum: Ө, x or H. (In experiments, Ө can be easily measured with a protractor; and, x and H can also be measured with metre rule; however, between x and H, x will give lower % of error since when x > H even if parallax or 'line of sight' error is avoided - On this, try IGCSE Physics 0625 Oct/Nov 2009 Paper 32, Question 1(b)): 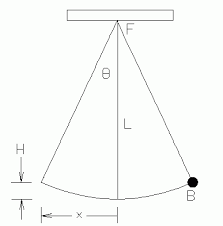 9.                  The period, T, of the oscillation is the time taken to complete one oscillation.
a.       A complete oscillation means a complete movement of a vibrating point from a reference point in a direction along a path and back to the same reference point and moving in the same direction - for examples: a pendulum moving from one extreme position to the other and back to the original extreme position; a loaded spring moving from the extreme bottom to the extreme top position and back to the extreme bottom.
b.      T = Tn / N, where Tn = Time for n number of oscillations; and N = n number of oscillations.
c.       Relationship between T and f and vice versa: Period T is inversely proportional to the frequency f (T = 1/f) and the converse is also true  - f is inversely proportional to T (f = 1/T).
d.   Relationship between T and 1/f and f and 1/T: Period T is not "directly proportional"  to 1/f because 1/f can never be zero - and, the straight line graph of T against 1/f never passes through the origin. The relationship is therefore: T increases linearly with 1/f; and, for the same reason, f increases linearly with 1/T. 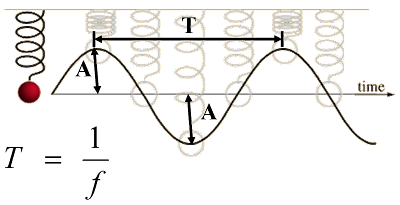 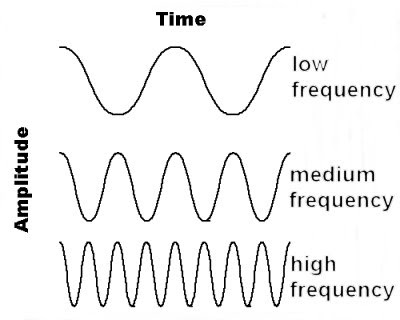 Answers:
(i) The wavelength decreases (since in the same medium - i.e. water of the same depth in the ripple tank - wave travels at the same speed and speed being v = λf means that when f increases, wavelength λ must decrease for wave speed v to remain the same).
(ii) The speed remains unchanged (since nothing is mentioned about the depth of the water in the ripple tank being altered. Q only mentions frequency f is increased)]

This graph shows the displacement of a vibrating loaded spring about its mean position against the time in graphical form. It is a sinusoidal graph from which we can obtain
a.       the amplitude, a; and
b.      the period T; and thus,
c.       the frequency, (by f = 1/T)
of the waves. 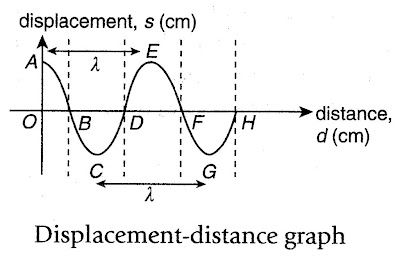 It shows the displacement of vibrating particles in a wave against their distances from the oscillating source in graphical form – The D vs. d graph is also a sinusoidal graph from which we can obtain
a.       the amplitude, a; and
b.      the wavelength, λ;
of the waves. (Please see: SPM 2012 P1 Q31 @ pg 338).

If we want to calculate the speed of the wave, we need to know the frequency f or the period T,  since v = λf; or v = λ/T; and we can obtain f from the earlier graph (D vs. time graph).

15.              The energy carried by a wave depends on its amplitude (for mechanical waves like water waves, sound waves, etc) or frequency (for electromagnetic waves).

17.              Damping:
a.       A body oscillating freely at its natural frequency but with decreasing amplitude is said to experience damping. Graphically, damping is shown as follows: 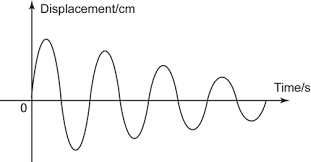 b.      Damping occurs in an oscillating system when the system loses energy resulting in the decrease in amplitude but not the frequency of the oscillation.

c.       Examples: A pendulum swinging freely or a loaded spring oscillating freely in a non-vacuum environment will see the amplitude of its swing (or oscillation) gradually decreases (while the frequency remains unchanged) until the swinging or oscillation stops:
d.      When damping occurs, energy is lost in two possible ways:
i.      To overcome frictional forces whether in air or in liquid – External damping;
ii.      Due to the extension or compression of the vibrating particles – Internal damping.

e.       To overcome damping, external force must be applied (thus energy is supplied) to keep the amplitude from decreasing. Such an oscillation is called forced oscillation.

a.       Resonance occurs in an oscillating system when the system is driven or made to oscillate at its natural frequency by an external periodic force.

b.      When resonance occurs, the system oscillates at its maximum amplitude.

ii.      Tuning radio or television to the frequency of the station or the channel – when tuner's frequency and the station's frequency are the same, resonance occurs to cause increase in amplitude of the radio wave and therefore better reception and clarity.

iv.     Tacoma Narrows Bridge disaster in USA in 1940 – wind blowing at the natural frequency of the suspension bridge causing it to resonate and vibrate with maximum amplitude resulting in its collapse.