6.      Ohm’s law (by a German physics teacher, Georg Simon Ohm in 1826) states that the current flowing through an ohmic conductor is directly proportional to the potential difference across its ends provided that its temperature and other physical conditions (length, cross-sectional area and material type) remain constant:
I = Constant x V; or,
V = Another constant x I (This other constant is known as the resistance, R)
V = R x I = IR (R is the gradient of a linear V-I graph for ohmic conductor); or
R = V/I (R is the ratio of instantaneous voltage over current for all conductors); or
I = V/R (I is also the ratio of voltage over resistance)
(Yr 2010 SPM P1 Q38 at pg. 240)

b.      of non-ohmic conductors are non-linear which pass through the origin and the ratio of V over I at any point of the V-I graph gives the value of resistance at that point – the higher the ratio, the higher the resistance.
(Yr 2006 SPM P1 Q36 at pg. 57)

8.      Resistance, R of a conductor is therefore defined as the ratio of the potential difference V across the conductor to the current I flowing through it. This applies to both ohmic and non-ohmic conductors. The unit of measurement of resistance R is therefore volt per ampere (V A-1) or ohm (Ω).

The graph below illustrates the resistance of the thermistor as a function of the temperature:

As can be seen from the graph, the resistance of the thermistor drops very quickly in the temperature range 0°C to 40°C - it offers good sensitivity to changes in temperature in this range; however, at much higher temperatures, it will be less sensitive to temperature changes.

10.  The resistance R of a resistor of a given material and at a given temperature can be calculated using this relationship: R = ρ l/A, where R is directly proportional to length l and resistivity ρ of the resistor and is inversely proportional to cross-sectional area A of the same. Resistivity ρ of a resistor at a given temperature is a constant dependent on the material of the resistor. Thus,
R = ρ l/A; or,
ρ = RA/l

11.  Voltmeter:
g.       It measures potential difference or voltage in volts (V);
h.       It is connected in parallel across the resistor or device;
i.         It has high resistance so that the current flowing through it is negligible.

12.  Ammeter (or milliammeter):
j.        It measures current in amperes (A) (or milliamperes, mA);
k.      It is connected in series with the resistor or component;
l.         It has low resistance so that its existence has insignificant effect on the magnitude of current flowing and to be measured.

13.  Measurement of Resistance: To measure resistance, we usually take the reading of the voltmeter in volts across the resistor over the reading of the ammeter for the current flowing through the resistor. Thus, R = V/I    (Instead of using the formula: R = ρ l/A, which we can use too if resistivity ρ, length l and cross sectional area A are all readily and accurately measurable or available)

(Some of the best conductors of electricity at normal temperature like copper, silver, gold are not superconductors even at absolute zero temperature, 0 K although their resistance R decreases with temperature)

o.      Once current flows in superconductors, it needs no further applied voltage (electric energy per coulomb) to persist flowing – there is no loss of current.

p.      Superconductors can produce magnets with magnetic field strengths > 10 times that of the best normal electromagnets. These superconducting magnets are useful:
i.      in the development of magnetically levitated trains and vehicles of the future;
ii.      in Magnetic Resonance Imaging (MRI) scanner as diagnostic tool in medicine
iii.      to produce computer chips which are faster and smaller.

q.      Superconducting wires or cables increase the efficiency of electrical power transmission as loss of energy as heat is greatly reduced.

r.        Students must be able to recognize the R (Resistance) – T (Temperature) graphs of normal conductors (pl see below for copper), NTC thermistor (pl see below), RTD (below) and those of superconductors (pg. 365). 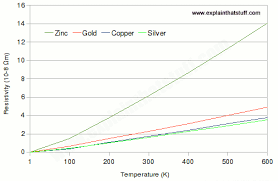