·         The normal is the line drawn at right angle to the mirror where the ray strikes
·         The angle of deviation of a ray is the angle between what would have been the direction of the original ray and the actual direction of the deviated ray.)
2.      Image Formed by Reflection:

A plane mirror is a flat, smooth and reflective surface which reflects in uniform direction light falling on it.

ii.          Characteristics of image formed by reflection in a plane mirror:

1.    Virtual – A virtual image cannot be formed on a screen;

5.    The image is as far behind the mirror as the object is in front;

6.    A line joining the image and the object would be:

a.    at right angle to the mirror (perpendicular); and,
b.   bisected by the mirror;

a.         the same distance and at the same speed as the object moves - towards or away from the mirror, following and depending on the object;

b.        twice the distance or twice the speed of the mirror as the mirror moves - - towards or away from the object, following and depending on the mirror;

c.         or rotate twice the angle of rotation of the mirror about a point in the mirror in clockwise or anticlockwise direction, following and depending on the mirror.

1.        Household mirror - We need plane mirror half our height to fully view our full height as follows:

6.        Laterally-inverted spelling of the word “AMBULANCE” at the front part of ambulance so that driver of the front car when viewing through his rear view mirror would read it as “AMBULANCE” and gives way accordingly. 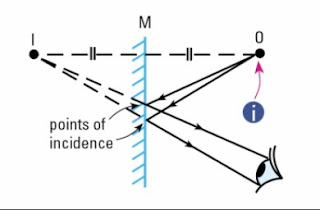